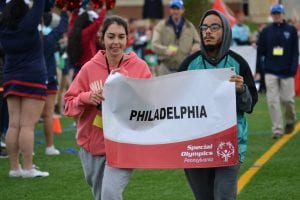 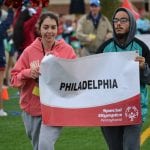 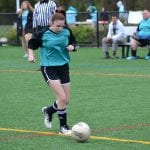 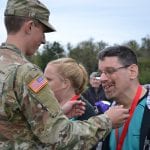 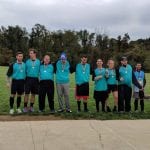 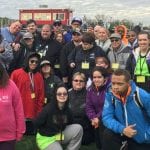 After months of hard work and determination, 9 schools from the Philadelphia area gathered for the 5th annual Unified Soccer Championships. George Washington High School hosted the 2017 Unified Soccer Championship on May 30. Two of George Washington’s very own students, Angel Rosa and Alyssa Henry, kicked things off with a great introduction to their school and emcee, Marc Zumoff, announcer for the Philadelphia 76ers on. Zumoff was beyond excited to be at the Championship and commenced the event with a parade of athletes. The roster included Abraham Lincoln High School, Audenried High School, Frankford High School, Martin Luther King High School, School of the Future, Sayre High School, Thomas Edison High School, and hostGeorge Washington High School. The crowds roared with applause as each team paraded across the field. After the athletes and partners took their seats, it was time for the Frankford High School Color Guard to present the colors. Before the national anthem was played, there was a moment of silence for Brandon Santos, a George Washington soccer and bocce player who passed away prior to the Championship. Britt Kleine, Director of Special Olympics PA – Philadelphia gave remarks to the crowd which included honoring Brandon’s memory by reminding students that playing and living unified isn’t confined to when they participate in Special Olympics activities, but rather a way of life, a life of inclusion. Matthew Aaron, President, and CEO of Special Olympics PA echoed those sentiments with stories he has heard from athletes and partners across the state.

Opening Ceremonies continued with Angel and Alyssa returning to the podium to give their experiences and how the Interscholastic Unified Sports program has made an impact on their lives. Ronald, Faheem, and Brooke, then lead the athletes and partners in the Special Olympics Athlete Oath that emphasizes the importance of sportsmanship over victory. Next, George Washington Coaches Yvonne Schwiker and Lori Solomon lead coaches in the Coaches Oath. With the reciting of the oaths complete, it was time for the highlight of Opening Ceremonies, the lighting of the cauldron! Philadelphia Police Highway patrol officers led the Flame of Hope procession on motorcycles as Deputy Commissioner, Dennis Wilson, marched alongside eager athletes and partners carrying the torch. The ignition of the Special Olympics cauldron sent a surge of energy through the crowds as Ronald, Faheem, and Brooke kept the excitement up by declaring the games OPEN!

The competition was spread across six fields and each field held tremendous competition. Most of the matches were close calls as each athlete and partner had their eye on the trophy and gold medal that could soon be theirs. As each team gave their all, spectators and coaches were there to support their favorite team and witness the true joy of sport. However, the fun was not limited to the competition. Olympic Village featured cornhole, lawn games, soccer in an inflatable field.  Plenty of delicious, and nutritious snacks and souvenirs were also available. Thank you to our great partners, Philadelphia Union, Shop Rite of Morrell Plaza, EAT.RIGHT.NOW, and Dave and Buster’s for providing a festive Olympic Village! Although there was a little shower throughout the day, smiles were abundant at the Unified Soccer Championship!

On Friday, May 29, 2015, Special Olympics Pennsylvania’s Philadelphia program partnered with the School District of Philadelphia for the 3rd Annual Unified Soccer Championship held at Northeast High School, located at 1601 Cottman Avenue, Philadelphia.  Opening Ceremonies began at 9:30am followed by preliminary competition until about noon. After teams participated in preliminary competition, they then went head to head for the medal rounds including the Championship game!  Special guest, Matt Cord, from WMMR helped start the day with an energetic, exciting Opening Ceremony.

Special Olympics Unified Sports® is an inclusive sports program that puts athletes with and without intellectual disabilities on the same team. This Unified Soccer elective course, developed in partnership between the School District of Philadelphia and Special Olympics Pennsylvania, includes curriculum with youth leadership components, anti-bullying elements and soccer training and competition.  The course provides greater access to sports for all students, with and without disabilities.