Our IUS 2016 Soccer League Games were off to a rainy start with our two original April dates being postponed due to rain. Once the rain cleared, we were able to host our first two league games in the sunny weather.

It might have been another chilly day, but luckily the rain held out for three rounds of soccer games. Thomas Edison hosted our first day of the second round of league play days for our 2016 IUS soccer season. Audenried Charter and Frankford High School both made their way to Thomas Edison High School where teams from the three schools played two games of soccer.

We got lucky on a very unlucky day (Friday, May 13th). The weather called for rain and rain clouds were looming up ahead, we were lucky enough that the rain held out until the last whistle blew on the last round of soccer. George Washington graciously hosted Abraham Lincoln High School, Furness High School, Martin Luther King Jr High School,  Sayre High School and School of the Future. Everyone arrived with high spirits and smiles on their faces.

On to the Unified Soccer Championship!

Join us on June 7th between 10:00am and 1:00pm at Abraham Lincoln High School

The 2015 Step Up Philly a climbing success! Yesterday, October 25th, Special Olympics Pennsylvania – Philadelphia held Step Up for Special Olympics, presented by PECO and challenged participants up 53 grueling flights of stairs at the BNY Mellon Center (1735 Market St.). Marc Zumoff, sportscaster for the Philadelphia 76ers on Comcast SportsNet, kicked off the event by welcoming participants and reminding them to take this challenge by the Athlete Oath of “Let me win, but if I cannot win, let me be brave in the attempt” as they ascended the stairs.

The MultiClimb and CrossClimb challengers were up first. As the MultiClimbers started their first decent up the tower, the CrossClimb Challenge began on the ground floor with a CrossFit workout. To keep participants energy high, 102.9FM WMGK played their Classic Rock and CrossFit Delaware Valley coach, Jacki Ford yelled words of encouragement to our participants. Those participating in the MultiClimb took the 53 flight challenge to the max, by deciding not only to climb the tower once, but to climb all 53 flights as many times as they could in an hour. Our winner of the MultiClimb, Charles Bower, climbed the tower 5 times! That’s 265 flights of stairs or 5,095 steps up!

As the last set of CrossClimbers started to head up the tower, it was time for the StairClimb challenge to begin! Climbers lined up to take on the 1,019 stairs up to the 53rd floor where Temple Football players were waiting to congratulate them and hand out water. It was a race to the top and did we have some fast participants! Our first place male, Stephen Marsalese, finished in 6 minutes and 47 seconds with our first place female, Jacqueline Guscott, trailing a few minutes behind with a time of 9 minutes and 21 seconds. Special Olympics Pennsylvania – Philadelphia wants to thank everyone who came out and conquered the stairs and can’t wait until the 2016 Step Up for Special Olympics! 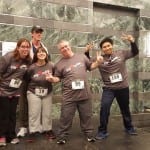 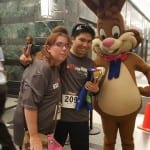 Thank you to our 2015 Step Up for Special Olympics Sponsors!!

2015 STEP UP CHALLENGE PRESENTED BY:

Test your speed up 53 flights or 1,019 stairs at this year’s Step Up for Special Olympics presented by PECO. Step Up 2014 is Nov 16. This event features four variations of the stair climb including a timed stair climb, a fun (untimed) stair climb, an “as many times” as you can climb version. If climbing stairs is too easy for you, why not try the CrossFit Climb, where participants add a CrossFit workout prior to the Stair Climb!

53 FLIGHTS OF STAIRS FOR THE FUN, THE FIT, AND THE FANATICS!