Our Unified All-Star team left early on Friday, August 10th and arrived at the hotel after a traffic-filled seven-hour bus ride. After barely settling into our rooms, most of the team grabbed their swimsuits and headed to the hotel pool to unwind. After a quick dip, it was time for dinner, courtesy of New England Revolution at Moe’s Southwest Grill. Once everyone was fueled up again, the team headed to 5 Wits which offers exciting escape room-like adventures. Our group split into two and one had to save the world from an evil, underground crime syndicate. The other had to escape the grip of a giant squid. If that wasn’t enough fun for one night, the evening ended with bowling, again courtesy of New England Revolution. After bowling, it was finally time to hit the hay before the big day on Saturday.

Saturday morning, the Philadelphia Union first team were all eating breakfast as our Unified team waited in the lobby to meet with our competition from Massachusetts. As we waited, players from the Philadelphia Union first team generously signed autographs, high fived, and encouraged the whole Unified team. We spent the rest of the morning and afternoon playing laser tag, arcade games, and eating chicken fingers and pizza with the athletes and partners who made up the Unified New England Revolution from Special Olympics Massachusets. After a short, mid-afternoon break, we all met again outside of Gillette Stadium to watch pre-game warmups on the field and be part of the tunnel as both Philadelphia Union and New England Revolution came back onto the field for the game. On top of all that, each fan who entered the stadium was given a team card that listed both Unified teams by name and number right next to the professionals whom they would be playing after (see photo below).

During the first-team game, both unified teams were treated to dinner in a suite. As the MLS first-team game was ending, both teams headed to the locker rooms to get ready. As our team emerged from the locker rooms and took the field, we were greeted by a lot of fans who stayed after for the unified match including a traveling  Sons of Ben, who even had specific cheers for some of our players. Unfortunately, our unified game was met with rain throughout the full 40 minutes. Luckily, Philadelphia Union has amazing fans and stayed with us the entire time.

The unified match saw us fall to Special Olympics Massachusetts 2-0. Despite the loss, our unified team played extremely well and was as close to a truly unified team that we have ever sent to an exchange game. Some of our athletes were on par or better than some of our partners and were sprinting right alongside them. As this was the first time we pulled together a team from various schools, we could only hope that the team would become that – a team. They came together as a team despite that they all check very different demographic boxes well beyond their athlete or partner label.

Congratulations to all of our wonderful athletes and partners who made up the Unified Philadelphia Union and a huge thank you and congratulations to our three coaches – Coach Bull Coach Tosto, and Coach Paul. 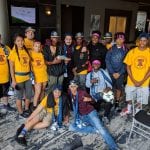 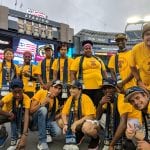 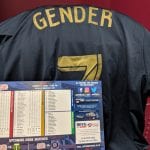 Rosters each attendee of the game received that shows the first-team players and Unified players. 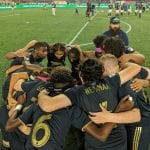 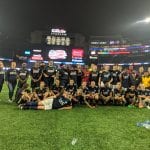