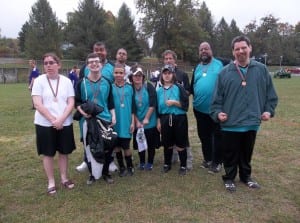 Philadelphia’s 5-a-side soccer team, Stars and Stripes, after earning the Bronze Medal during the impressive showing at the Fall Sectional

On October 5, 2013, Special Olympics Pennsylvania head their 2013 Eastern Fall Sectional at East Stroudsburg University. The Philadelphia local program had an impressive showing at the fall sectional as athletes competed in soccer, bocce, volleyball, powerlifting and long distance running and walking were the sports offered at the Fall Sectional. Three bocce teams, two soccer teams (a 5-a-side team and a 7-a-side team), and a volleyball team represented the Philadelphia local program. The Eastern Fall Sectional is held to determine which athletes qualify for Special Olympics Pennsylvania’s Fall Festival, hosted by Villanova University. After a day of intense competition, we are proud to announce our teams had an impressive showing at the fall sectional.

Congratulations to all of our talented athletes and our coaches who helped them achieve their medals!