Matt Beckman Named Athlete of the Week at TD Bank! Each week, TD Bank selects an athlete to feature and this week it’s one of our Philadelphia athletes! 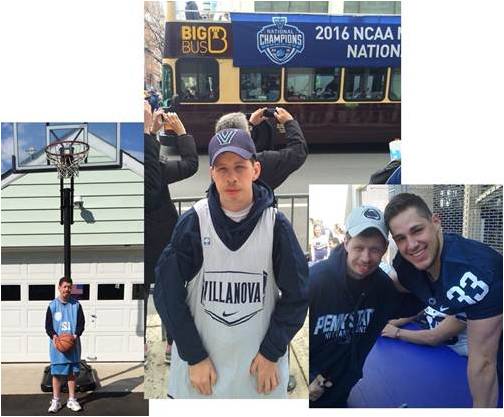 Matt has has been a Special Olympics athlete for most of his life. He started when he was eight years old. Every year, his goal is to qualify for that year’s big tournament. Matt has attended Special Olympics Pennsylvania’s Fall Festival for soccer held each November at Villanova University for eight consecutive years. This year, he attended the parade held in Center City Philadelphia after the Villanova Wildcats won the NCCA Men’s Basketball National Championship.  During the parade, Matt got a shout-out from Ryan Arcidiacono who yelled from the top of the bus, “Hey guys, look! That’s my friend Matt.  Hey Matt!” and all the players waved and yelled, “Hey Matt, thanks, buddy!”  How cool is that? Matt met Ryan two years ago at the 2014 Fall Festival when Ryan autographed one of his Villanova basketball practice jerseys and gave it to him.

Matt’s father, Walt, has been his basketball and soccer coach since he was four years old when he began playing outdoor and indoor soccer on a City of Philadelphia championship Club team.  Every year, Matt and his team travel to East Stroudsburg University for the Special Olympics Eastern Fall Sectional. Leading up to the event, Matt always has one question―Will Uncle Tim, Aunt Annette, Timmy and Sean be there to cheer me and my friends on at the soccer field? And the answer is, of course!

When competing as part of the Philadelphia (2008‒2012, 2015) and Bucks County (2013-2014) Special Olympics squads, Matt has won a rainbow of ribbons and medals including, of course, a gold in soccer.  He participated in the Summer Games held in June at Penn State for Basketball in 2012 with Philadelphia County, and is excited to be going back to Penn State again this June as his Philadelphia County basketball team has once again qualified.

In addition to his many years with Special Olympics, Matt is a well-known member of the Athletes Helping Athletes (AHA) Honorary Captain program in Bucks, Montgomery and Philadelphia counties.  Through this program, Matt has met hundreds of high school and college students, young men and women, athletes and scholars―all who volunteer their time, attention, support to promoting respect and inclusion for young people with challenges.  The impact Matt has had on the volunteers who are part of this program has no measure, and no equal.  He stays in contact with a number of former high school AHA volunteers who have continued playing sports in college, and who often invite Matt to attend their football, basketball and baseball games.  He and his friends have inspired more than a few students to consider the special needs community as a career path.  Matt also sings with the Autism Cares Foundation Glee club, which stages twice-a-year concerts for family and friends, and has begun performing for area n
ursing homes.

The thing that makes Matt so very special is  he is always ready to meet, greet, and participate in any social situation – he is eager to introduce his new friends to his old friends! He always has a big smile on his face and is ready to go – constantly asking where’s the game, what time does the bus leave and shouting words of encouragement to his teammates such as good luck, guys, I know you can do it, and make me proud. Everyday is paradise as he lives his  life in a larger-than-life fashion.

Matt’s family is extremely proud of him!