The ceremony kicked off with a welcoming and introduction from Principal Susan Thompson. The three masters of ceremonies: Isaiah Jackson, Joseph McGinley, and D’angelo Delgado then took over in order to explain what Unified Sports are and why they are an asset to the school. Isaiah introduced the parade of athletes while the band played lively music. The music continued when George Washington students Roger Galati and Kailh McFadden sang the National Anthem, accompanied by Mr. Chen and the George Washington High School Band. Isaiah, Joseph, and D’angelo explained the school’s history and success with unified sports since 2016.

George Washington’s Athletic Director, Ken Geiser gave a speech followed by Dr. Dion Betts who presented Principle Thompson with a Citation. Next, alumna Julie Matthews expressed her gratitude and appreciation for being a partner for two years and was accompanied by students Angel Rosa and Zachery Gender. When this was over, Isaiah introduced a video showcasing some highlights over the last 4 years of the various George Washington High School sports. After the video had played, the George Washington High School Unified Cheerleaders gave an energetic performance. Special Olympics Pennsylvania President and CEO, Matt Aaron continued the celebration and introduced Bettyann Creighton. Bettyann was presented with flowers for all of her years of service to the School District of Philadelphia and Special Olympics once she returned to her seat. Director of Special Olympics Pennsylvania, Chase Trimmer then revealed the banner to the school and the ceremony ended with Isaiah thanking everyone for joining them.

It was an exciting and fun-filled day. We could not be happier that George Washington High School was presented with this banner and are excited to see what more they do with the Unified Champion School status! 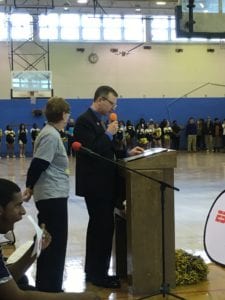 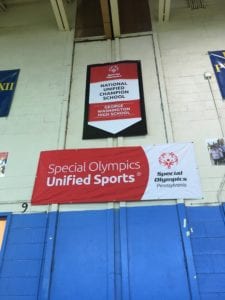 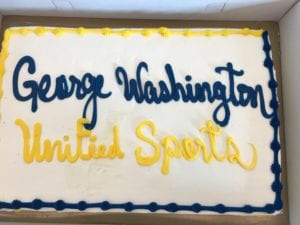