Spread the Word Inclusion at University of Pennsylvania

Members of the organization urged people to sign our poster and pledge that they would end the use of the R-word, spread inclusion, and show respect.  Most people walking by were intrigued by our table and wanted to know more about the Spread the Word Inclusion campaign.  Other members of the community were already aware of the campaign and were excited to see Penn’s involvement with the campaign. In addition, our table gained a great deal of interest from students due to the attractiveness of the Spread the Word prizes and goodies we displayed.  People who pledged to ‘Spread the Word’ were able to spin our prize wheel and have the chance to take home stickers, candy, a water bottle, or even a T-shirt!

Throughout the week, the tabling successfully conveyed the message of the “Spread the Word Inclusion” campaign.  Hosting this table both allowed Penn Special Olympics to educate Penn community members and also showed how motivated the campus is to spread inclusion. 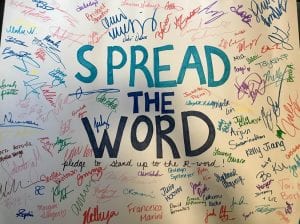