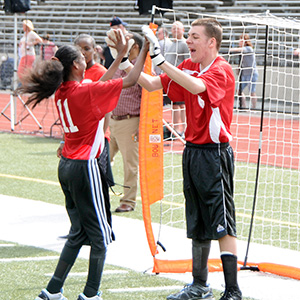 On Friday, May 31, 2013, Special Olympics Pennsylvania’s Philadelphia program will partner with the School District of Philadelphia for an inaugural Unified Soccer Championship held at Frankford Memorial Stadium, located at the corner of Wakeling and Large Streets in Philadelphia. Opening Ceremonies, hosted by Veteran Philadelphia Sports Broadcaster Don Tollefson, will begin at 9:45am followed by competition until noon and the Championship game at approximately 12:30pm.

The Championship features teams from 10 Philadelphia high schools from across the city including: Abraham Lincoln, Edward Bok, Frankford, George Washington, High School of the Future, Northeast, Samuel Fels, Thomas Edison, Boy’s Latin and University City High School. Approximately 100 athletes will culminate months of preparation for these Unified Games and display the “best of the best” during this year’s competition.

The United States Department of Education (DOE) released new guidance to schools and school systems throughout the nation that receive federal aid about the requirements of providing quality sports opportunities for students with disabilities on January 25, 2013. Special Olympics Unified Sports® is an inclusive sports program that puts athletes with and without intellectual disabilities on the same team. This first ever rostered Unified Soccer elective course, developed in partnership between the School District of Philadelphia and Special Olympics Pennsylvania, includes curriculum with youth leadership components, anti-bullying elements and soccer training and competition. The course provides greater access to sports for all students, with and without disabilities.

“To see Unified Sports in action is to see inclusion at its finest,” said Barbara Chavous, Director of Special Olympics Pennsylvania’s Philadelphia program. “What better way for our young people to accept their peers than to allow them to be teammates and equals on the playing field? I truly believe this program is breaking down walls and creating tremendous positive change among our youth.”

Special Olympics Pennsylvania’s Philadelphia program is also launching their “Volunteer to Cheer” program to encourage students from participating schools to cheer on their peers. Competition is not as special without the fans, so supporters of any age are invited to come and support their team. For more information visit www.facebook.com/SOPAPhiladelphia and click the Volunteer to Cheer tab.