Floor hockey was introduced as a Special Olympics sport in 1970. Floor hockey is a family of indoor hockey games, usually in the style of ice hockey, that are played on flat floor surfaces, such as a basketball court. As in other hockey codes, players on each team attempt to shoot a ball or puck into a goal using sticks, usually with a curved end. 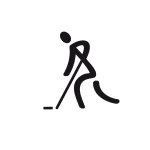 Athletes training for at least 8 weeks in our Winter sports are eligible to compete in Winter tournaments. Final dates to be added as venues are confirmed.